The ministry of Public Service participated in the recently concluded TAXPAYERS APPRECIATION WEEK FROM 26TH- 28TH SEPT 2018. During the three days exhibition at Kololo the general public and clients interfaced with brought out key salient issues that have affected service delivery which included among others; lack of knowledge and distinction between mainstream Ministry and the Commission, the disparity, inconsistencies in salaries, lack of support from Human resource persons in Institutions and at Local Government levels especially when they need to access payroll for the newly recruited staff and annual salary increments for serving Officers.
At the Ministry stall the majority of clients included the teachers and Police officers who complained of lack of support from their Human Resource Office and especially their salaries not being annually increased yet it is automatic to move from one segment to another.
Another issue that came up was the newly circular about the duty facilitation Allowances to civil servants that were reversed to the old rates they referred this to as unfortunate on their side after having lost the salary enhancement they thought this was a move to lessen the disappointments but again demotivated move from government.
Most of the visitors appreciated the responses and the innovations the Ministry has undertaken to improve the service to client especially the time spent to be helped and the guidance given by staff had tremendously improved. While this was appreciated they appealed to the Ministry authorities to put their foot down on the reforms that are geared towards improving the working conditions of the civil servants in 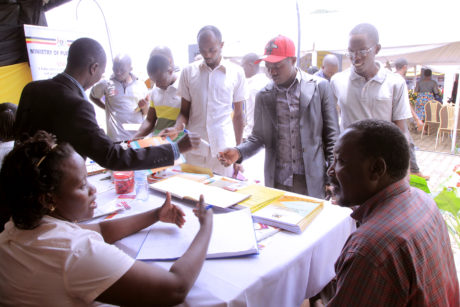 this country especially the issue of remuneration remain a thorn in the flesh.