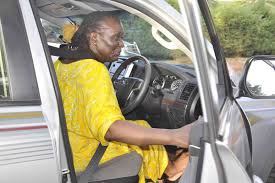 Government, on Monday 20th November 2016, handed over a Toyota Land Cruiser V8 worth Shs. 350 million to former Vice President Dr. Specioza Wandira Kazibwe as part of her retirement benefits as enshrined in Past Leaders’ Act, article.

At a function held at her home in Ddundu, Mukono district, the former Vice President implored government officials to return to their home villages and start a new life other than stressing themselves with life in the city after retirement. “Why remain in town to eat food whose source you are not sure of. Leave the jobs to the young people and go and do exercise in the farm. There is a lot of money in agriculture but we do not know,” Dr. Kazibwe urged. “Let us leave the pollution which is making us sick and get fresh air that will enable us be the ears and eyes of government in the villages. I am happy to see that at this stage of my life when I have retired, government can facilitate my transport to enable me do my work. I thank the president who made me his Vice for three times and enabled me serve this country” Dr. Kazibwe added.  She said that such a gestures encourage other leaders to serve government with diligence.

The Minister of Public Service, Hon. Muruli Mukasa explained that the former Vice President can use the vehicle for official duties and other functions.  The Government will service, maintain and fuel the vehicle as well as provide a chauffeur.